Prior to 1940 there were many fraternal organizations in Port Clinton; Masons, Eagles, K. of C., L.O.O.F., The Moose was located above The American Bank which is now Key Corp.
A group of men namely: Clem Lauer (local tailor), Herm Frederick, Otto Heineman, J.G. Kolesar, Charles Martin Jr., and several more decided to petition the grand Lodge to form a Port Clinton Elks Lodge. Mr. Frederick was a member of Bellevue, Ohio Lodge, Otto, a member of Sandusky, Glen, a member of Toledo and Charles Martin, a member of Fremont. These men had to agree to demit to the P.C. Lodge which was the basis for a new lodge. These men and several others who were dedicated met frequently and Toledo was the sponsoring lodge.

There were 109 men signed up for charter membership in January 1947. Meetings were held above Park-Anderson store on Perry Street and dance and special functions were held at the Port Clinton Armory and were very formal.

All the time the officers were on the "look out" for a potential "home". Two houses on Perry Street almost identical were located where the Island House parking lot is now and our lodge site. This property was for sale and some of the mentioned above provided enough capitol for the purchase. This home had a beautiful fireplace in the living room. In later years, the addition of the lodge room and a small bar was accomplished by selling certificates to members.

The officers chairs were purchased in Mexico and donated by Otto Heineman. He also transported them back to Port Clinton. For many years we had a most trusted Secretary and Club Manager, Reed Hosler, who was also Chamber of Commerce Secretary. 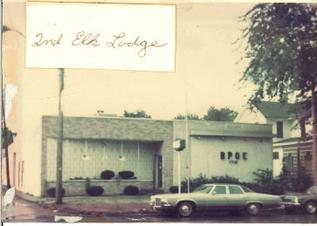 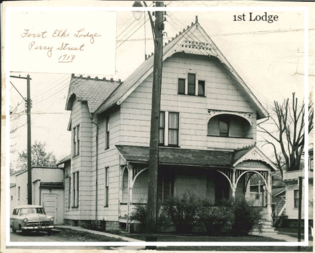 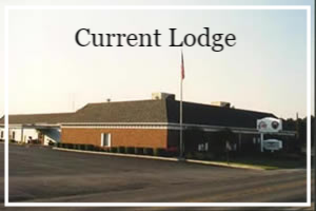